I am interested in technology, the most obvious manifestation of which is naturally Element. At the same time, the USA’s recent developments and their relationship with technology, and more specifically with social networks, are so interesting that I decided to write this article that has nothing to do with our recruitment system, with recruiting and with the HR area in general.

Big Tech is the largest IT company in the USA. They include mainly Amazon, Apple, Google, Facebook, and Microsoft. In political discourse, Twitter is also often classified as Big Tech due to its enormous potential for disseminating information and a special role in political campaigns since Donald Trump started his Twitter activity.

Trump’s term in office has brought about a lot of controversies, the apogee of which in the context of Big Tech is currently being observed:

What are American Conservatives doing at this point? They are moving massively to the Parler messenger, which guarantees greater freedom of published content and brings promises of no censorship known from Twitter, Facebook, and YouTube.

The transfer of users to Parler is so large that the application cannot run smoothly, and in recent days there have been problems with its operation.

At the same time, Elon Musk, who has been criticizing Facebook since the Cambridge Analytica scandal (he removed his own profile, Tesla or Space-X from this portal), first pointed to the relationship between Facebook and the current political tension: 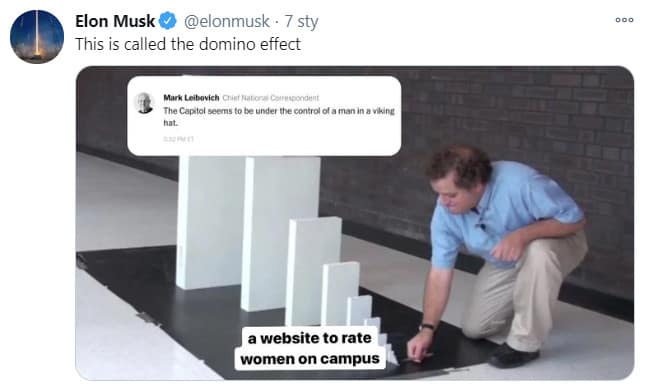 He then pointed out Signal as an alternative to Facebook Messenger to 41 million of his Twitter followers:

So we have, on the one hand, censorship and account blocking by giants of internet communication. On the other hand, emerging alternatives for which the current situation is a wind blow, and one Musk post causes a hurricane. Parler i Signal immediately hit the list of the most downloaded apps in the AppStore: 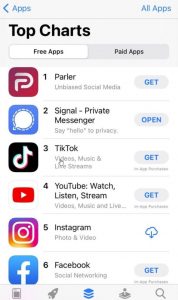 What is Big Tech’s reaction? Google and Apple are removing Parler from their stores because the app contains incitement to violence. Amazon terminates the agreement to maintain the application on its servers. The notice period is 24 hours. The reaction is, therefore, ruthless. The polarization of society driven by social media (the mechanism of this polarization was perfectly presented in the movie Social Dilemma available on Netflix), not only led to an enormous exacerbation of political disputes but also caused a mass movement of users from dominant networks to emerge alternatives such as Parler, Minds.com, Signal or Telegarm. The current situation is also an unquestionable signal that there is not only space but also a growing need to build alternative solutions. This could initiate something that has hitherto been unimaginable, which is slowing the growth of Twitter, Facebook, and Google’s dominance and then breaking it. To sum up, I am observing the next events with great interest. I am concerned about voices in the US to refuse to provide services to companies or individuals with certain social or political views. I would not like Google, whose services the infrastructure of our applicant tracking system is based on, once asked us with an ultimatum to stop providing services to any client just because, for example, his company is doing something inconsistent with some political or social opinion. In Poland – my home country – it seems to be a complete abstraction, but “cancel culture” has already developed very strongly in the USA.

Recruit easily and efficiently thanks to tomorrow's technology
SCHEDULE A DEMO 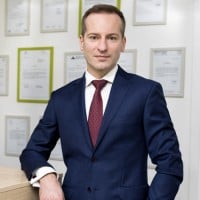 2021 was a period of a strong rebound in recruitment companies and temporary work agencies. Check details in the report published by the Polish HR Forum.

How to avoid ‘ghosting’ in recruitment – practical tips

Candidate Ghosting – what it is and how to avoid it? Ghosting in recruitment – what does it mean? Suppose a candidate suddenly stops contacting

Element ATS – 2021 recap Element ATS has doubled the number of customers. The result itself sounds good, but we are not satisfied. Find out

How to turn on dark mode on Linkedin mobile app

If you care about your eyesight and regularly use Linkedin, switch to dark mode on your mobile app. Here you will find how to do it in 6 simple steps.

Facebook jobs feature is disappearing for most users in February 2022. Here is everything that we know at the moment about coming changes.

Two months of intensive learning are behind us. We have a solid dose of knowledge on how to better manage our business and how to better solve our clients’ recruitment problems with Element applicant tracking system.